PokerStars VIP changes 2016 are significant and they are one sided – players are being screwed!  Yep, I said it. PokerStars has displayed absolutely zero regard for the interests of their regular players since they were taken over by Amaya Gaming. Is this surprising? No. The fact of the matter is that PokerStars runs a private business and they can do whatever the heck they please. However, the fact of the matter is that nobody has to use their service either. In light of recent changes (which I will cover in more detail later), I hope that all regular players will leave PokerStars. PokerStars has abused the trust they build up over years with players, they have broken their word, and they have displayed a contemptuous lack of respect for many individuals who were fantastic clients of theirs for years. For those of you who still struggle to take PokerStars name in vain (due to years of built up loyalty), just remember it is really Amaya that is hosing you down. PokerStars is simply dead, PokerStars no longer exists, PokerStars has become a pathetic brand that will be cannibalized so Amaya Gaming can squeeze every last dollar out of players pockets. Frankly, PokerStars is dead to me and I hope to you as well…  I wrote a special little ballad for them at the end of this article so be sure to check that out. Now lets get down and dirty with the details.

Why Has PokerStars Screwed Players?

Well, there is nothing like money to make business dirty and Pokerstars VIP changes are entirely about money. After Amaya took over I warned about how sinister Pokerstars might become in my article PokerStars Rake Increase @ A Death Spiral. That article does a pretty good job of describing why PokerStars might destroy the brand entirely. Bottom line is that PokerStars needs cash and they need it now. Their financial results have been extremely subpar in the past couple of quarters (hurt dramatically by a rising USD). As far as I could tell Amaya has some debt coming due in 2017, but most of it in 2020. The company is extremely levered, but should probably be able to make enough cash to pay back creditors, IMO.

With no more market share growth to be had their only option is to take advantage of their monopoly power to squeeze poker players margins. Amaya will extract every dime they can from the poker community and much of it will end up in the hands of the creditors.

That was a quote from last year in the article I wrote. So here we are about a year after I first wrote that article and SURPRISE PokerStars is squeezing ever more morsels from players how are already dealing with a declining industry. Ironic too since many suggested to me that my article was a bit silly at the time. Funny how that works……

The highlights of PokerStars VIP changes are.

1) Supernova Elite will be gone by 2017. Just to rub salt in the wounds they weren’t

2) $5/$10 and higher cash games will no longer have VPP’s. This is particularly frustrating for high stakes players. The irony of this is they are essentially telling all high stakes guys they don’t want them around. Yet, their very identity is build around creating “PokerStars”. This is truly a sign of just how far the apple has fallen from the tree.

3) They are going to devalue FPP’s by approximately 25%. This is terrible for players who had build up huge stocks of FPP’s but don’t have a great status on the site right now. They may have been planning on playing a ton in the New Year and building up to Supernova status before converting – now they just lose. Who wins? Amaya of course :). Who loses? Naturally, all of you fellow players. Not surprisingly if you think about what VPP’s are from a balance sheet perspective they are a liability, and we all know that on a balance sheet liabilities need to match up with assets. The beautiful thing from a business perspective about what Amaya is doing is with one wonderfully nasty stroke of the pen they are wiping out a huge chunk of liabilities. By my estimates there is about 100 million in VPP liability (feel free to correct me if you have better data) so with one little WHOOSH 25 million went bye bye. Not bad work if you can get it….. Wouldn’t it be sweet if you could devalue your mortgage or credit card debt like that? lol

5) PokerStars concierge service for Supernova and Supernova Elite players will be cut. Just in case you thought the “perks” of playing at Stars were nice, that will no longer be the case. PokerStars is cutting down to the bone….

Pokerstars Supernova program has long been held up as the penultimate accomplishment for a poker professional. Lavish parties are hosted for you, concierge service provided, and most important some pretty sweet rake back and cash rewards. Today, that is no longer the case and it is time for players to move on. If you have some FPP’s left cash them in and head for the hills.

PokerStars Spin Machine Is Plain Insulting To Our Intelligence

Perhaps the most infuriating thing for players is to have to deal with the grossly disengenuous spin and PR that Amaya is using. PR gets a bad name precisely because companies like Amaya/PokerStars use it to flat out lie about what they are truly doing.

Make NO mistake about it. Nothing and I repeat None of the PokerStars VIP changes had ANYTHING to do with building a “more balanced long term poker economy”. All of these changes were done to squeeze more cash out of PokerStars right now! Oh yeah, and to further mess with poker players minds and try to confuse us they decided that a few red herrings thrown in the mix might throw us off the scent of what they were really up to. So, they decided lets talk about how technology is ruining the game and the need to control third party software.

People have differing views on where the line around third-party software in poker should be drawn; it’s certainly something that we constantly debate and review. Technology can aid, but it shouldn’t take over.Today, we want to make clear that the line will be drawn to preserve poker as a battle of wits and a test of heart. This will only have a direct effect on a small proportion of players and builds upon our responsibility to provide a level playing field for all players.

Lol, this really is quite hilarious if you are not effected by their changes. Sure it sounds reasonable at first glance but it is just PR bullshit written to distract you. Of course we all want “to preserve poker as a battle of wits and a test of heart”. What the heck does that have to do with jacking up the rake and eliminating player benefits though…..? Nothing of course.

We are confident that these changes will improve the playing experience for all PokerStars players and will drive increased play and more players to the ecosystem.

Again, I think given your behavior of late PokerStars it is very clear that this is an outright lie. The money that you are taking from your long term clients is not being reinvested in the “ecosystem” or into marketing or anything of the sort. This is pure and simple a money play because Amaya is calling the shots and they need to pay the bankers. For once please lets just call a spade a spade.

Where Should PokerStars Players Go?

The answer at this point is anywhere but Stars. It was pretty clear to me last year that PokerStars was not going to be a very player friendly environment for regulars anymore. It has taken sometime for this to come to fruition, but the trend is not your friend when it comes to PokerStars. Don’t waste your time investing in silly VIP programs that may or may not exist in the future. Don’t stake your career on them giving back to you and then tell yourself they will never cut the program. Yes, we all love the great software and the nice payouts from them, but at some point it is simply not worth it. That point has arrived…..

The Poker Dream Is Dead

At least on PokerStars. They just decided to slap all high stakes players in the face despite the fact their entire brand it build on creating “PokerStars”. I think many players who are involved in the game have harbored some dream of someday being able to play in the “big games”. If PokerStars was truly interested in the good of poker and the ecosystem eliminating high stakes games (which is what will effectively happen as all but a few games gravitate toward $2/$5) they wouldn’t be gettig rid of the high games. How many people railbird a $1/$2 game? I have seen tons of people railbirding $100/$200 games though… They are simply more interesting, and that isn’t going to change anytime soon. Players need something to work toward and by slapping all high stakes players in the face you are effectively slapping the entire community in the face.

Amaya Stock Is Down 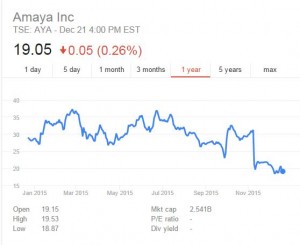 This is more of an interesting side note than anything. It really speaks to the pressure of being burdened with a huge amount of debt when certain macro fundamentals turn against you (namely USD appreciation). Oh and there is one other little gem out there too. Amaya is being investigated in Quebec for possible securities fraud related to insider trading. The back story there is that the stock traded in an EXTREMELY unusual manner immediately before the massive acquisition of Rational Group. This kind of behavior is consistent with insider trading, which set off the regulatory investigation. Why am I not surprised that these wonderful characters at Amaya would be wrapped up in this cloud of darkness.

Btw, I have created a special little piece to say goodbye to Stars!

The year was 2006, you are a poker pro and life looks awful good.

Players Were Ballin, Vegas were callin, and the money was so good.

Then came UIGEA, our ports became safe, and Daniel was known as the “kid”.

Lederer is a dud, Scheinberg is a stud, and Isildur is on a quest.

Along came Pius Heinz, he won it all, but who can remember his lines.

The year was 2015, online poker extinction was feared, only PokerStars remained.

Amaya was lurking, insiders were cursing, and Pokerstars became hairbrained.

Supernova was gone, bankers had the brawn, and Daniel appeared cosntrained.

The year was 2016, Extinction had neared, and rake went ever higher.

Regs went to work, Stars was a jerk, PR read like a flyer.

Tables were silent, Stars screwed the client, all that was left was the pyre.

That will be the first and last bit of poetry you get from me (if you can call it that, haha). Well, that is it from me for the evening. Enjoy the holidays and all the best in 2016!

ThePokerCapitailst (No nonsense, no ads, straight talk on poker)